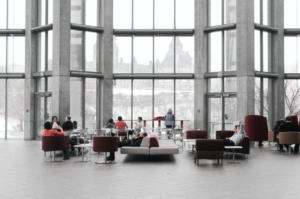 FiberPlus professionally installs new and existing Community Access Television (CATV) systems, more commonly referred to as cable television, throughout the DMV. While you can rely on your television service provider to ensure there’s a balanced signal throughout your commercial building, the final distribution of a strong signal is left to the discretion of the building owner or occupant. If you’re looking to ensure the complete signal strength of your CATV system, FiberPlus can work with you to professionally design and distribute a strong signal throughout your commercial building.

CATV is known in the modern digital age as cable television, though it was originally referred to as Community Access Television. CATV is the most common form of transmitted television data into a commercial or residential building through radio frequency. Other forms of cable television broadcasting include satellite dishes, closed-circuit television, outside broadcasting, and terrestrial television (or bunny ears, which have long been retired). Now, with the installation of fiber optic cables, CATV can be transmitted through pulses of light which increases your television signal strength immensely.

Why Would My Commercial Building Need Additional Support for CATV?

Your commercial building might need additional support for CATV if you’ve noticed a weak signal strength throughout your building, television service that disconnects, lags in programs, or weak internet connection that contributes to the responsiveness of your television. If you feel as though your cable television is doing the absolute bare minimum, then your commercial building will benefit from FiberPlus overhauling your current CATV system to increase your signal strength.

When cable television was originally designed, it used one-way, analog transmission through coaxial cable. The creation of fiber optic cable has provided television providers with the ability to transmit signals to numerous customers at any given time. Additionally, fiber optic cables can help prevent an outage, which makes it the preferred option for cable television. Contact FiberPlus today for all of your CATV installation needs if you’re looking to switch to powerful fiber optics.

FiberPlus has been providing data communication solutions for over 25 years in the Mid Atlantic Region for a number of different markets. What began as a cable installation company for Local Area Networks has grown into a leading provider of innovative technology solutions improving the way our customers communicate and keeping them secure. Our solutions now include:

Have any questions? Interested in one of our services? Call FiberPlus today 800-394-3301, email us at info@fiberplusinc.com, or visit our contact page.  Our offices are located in the Washington, DC metro area, Richmond, VA, and Columbus, OH.  In Pennsylvania, please call Pennsylvania Networks, Inc. at 814-259-3999.

Categories: Services Offered | Tags: cable television, CATV, and fiber optic cables
This entry was posted on Friday, June 18th, 2021 at 9:48 am . You can follow any responses to this entry through the RSS 2.0 feed. Both comments and pings are currently closed.